Change is one of the few constants in life. Things always change.  But the rate of change isn’t constant. Sometimes things change slowly, whereas other times are marked by rapid change.

If you had visited the Language Research Center at practically any time during its 38-year history, you would have been likely to see Charles Menzel, John Kelley, and David Washburn.  Each has worked at the LRC for more than two decades–since Duane Rumbaugh was its Director, since language-acquisition research was being conducted with its young chimpanzees and bonobos, since before the language-intervention project moved to the schools and homes of nonspeaking youths with intellectual disabilities, since the days before resident colonies of monkeys were part of the center. Across the years, the three became the silverbacks of the LRC research community.

In a span of a few months, all three have retired from active service to Georgia State University and the LRC.

Dr. Charles Menzel earned his PhD in anthropology from the University of California-Davis (1986), after receiving his B.S. in zoology from Duke University (1977).  Following postdoctoral research positions in Osaka, Zurich, and Washington DC, he joined the LRC research team in 1996. He is best known for his extensive research on foraging, spatial cognition, and memory–including long-term investigations of Panzee, Sherman and other chimpanzees as they recalled the locations of food items that were hidden in the forest surrounding their play-yards. Dr. Menzel also taught frequently in the psychology department at Georgia State University. He retired in February of 2019, but remains active in research at the LRC, with several ongoing grants.

John Kelley retired from Georgia State University in June 2019, after more than 30 years at the LRC. He was originally hired as an animal caretaker, and provided animal care for every nonhuman primate–and particularly for the apes–in the LRC’s resident colonies. He held the position of Assistant Director of Animal Resources at the time of his retirement. It is no exaggeration to say that every building, every play-yard, and every policy at the LRC reflects the unique and valuable contributions of Mr. Kelley. He was an effective supervisor of the caretaking staff, a skilled manager of the physical facilities, a valuable collaborator on many of the scientific investigations, and a treasured companion to the chimpanzees at the center.  In his retirement, John plans to travel and spend more time with his family.

David Washburn came to the LRC as a first-year graduate student in 1984, having earned his B.A. from Covenant College. His primary assignment was computer programming for the center until 1986, when he began working with the new rhesus monkey colony on NASA-funded research. He earned his Ph.D. from GSU in 1991, and remained at the LRC in postdoctoral positions until accepting appointment to the psychology faculty in 2000. When founding Director Duane Rumbaugh retired in 2001, Dr. Washburn was appointed as the center’s Director, and remained in this role until 2019, when Dr. Mike Beran was named Interim Director. Professor Washburn also served as program-director for three program-project grants funded by the NICHD, and oversaw growth in the LRC research team, resident animal colonies, physical facilities, and scholarly output. He retired from GSU in August, 2019, and accepted faculty appointment at his undergraduate alma mater. He plans to remain active in research at the LRC. 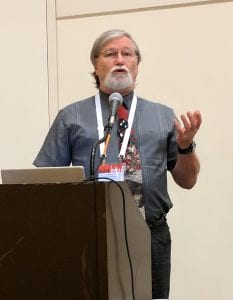 In addition to these three retirements, longtime LRC researcher and Professor of Neuroscience Dr. Bill Hopkins left GSU at the end of 2018 to accept appointment at the M.D. Anderson Cancer Center in Texas. Dr. Hopkins, who has been conducting research at the LRC in 1983, will continue collaborating with LRC scientists from his new position.

Congratulations to each of these longtime members of the LRC family. It is an exciting time for each of them, and for the Language Research Center itself.