The science of self control

Indulge or diet? Spend or save? Sleep in or get busy? Play or study? Life is filled with choices, often requiring self control. You can have something good right now, or something even better if you wait until later.  What determines your choices in these situations? Are these same variables important in the choices made by nonhuman animals? 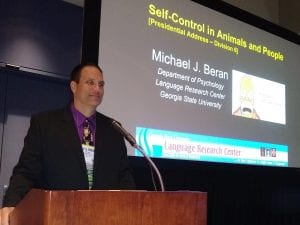 Professor Michael J. Beran and his collaborators have been investigating self control for years. Inspired by classic demonstrations like Dr. Walter Mischel’s marshmallow test, Dr. Beran has studied children, chimpanzees, and monkeys on a wide variety of tests involving smaller-sooner vs. larger-later options. Tests of delay discounting, response inhibition, delay of gratification, and other self-regulation paradigms have revealed the conditions under which monkeys will manifest self control, documented the ways that chimpanzees will engage in self-distraction so as to delay gratification until later, and yielded a theoretical model of self control to organize the many aspects of self-regulatory behavior that have been demonstrated by human adults and children and a variety of nonhuman animals.

Dr. Beran reviews this work and explains the theory in his latest book, Self Control by Animals and People (Academic Press, 2018).  The book is a scholarly volume, filled with research methods and findings–from his own research program, as well as from published work by many other scientists in the field. It is also a very readable treatment, balancing careful consideration of empirical efforts with everyday illustrations that make even the most complex discussions accessible and clear. It is a book that is appropriate for classroom seminars on the cognitive and comparative psychology of self regulation; but it will also be a popular read for a broad, nontechnical audience. 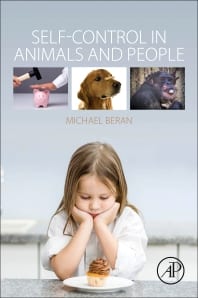 In his recent presidential address to the Society for Behavioral Neuroscience and Comparative Psychology (Division 6) at the annual convention of the American Psychological Association, Professor Beran discussed the research from this book. Together with his collaborators, Dr. Beran has developed a new hybrid test of self control, a paradigm that allows researchers to measure whether participants–human or nonhuman–choose larger-later options, and also how well the participants maintain those choices. That is, can monkeys, chimpanzees, children or adults pick to wait for larger or better rewards, and then how effectively can they stick with that choice in the face or growing pressure from time and incentives? Some of this work was also described in Dr. Beran’s speech at the March 2019 meeting of the Southeastern Psychological Association, another organization that elected Mike Beran as President this year!

To learn more about Self Control in Animals and People,  or to order the book from Amazon, click HERE