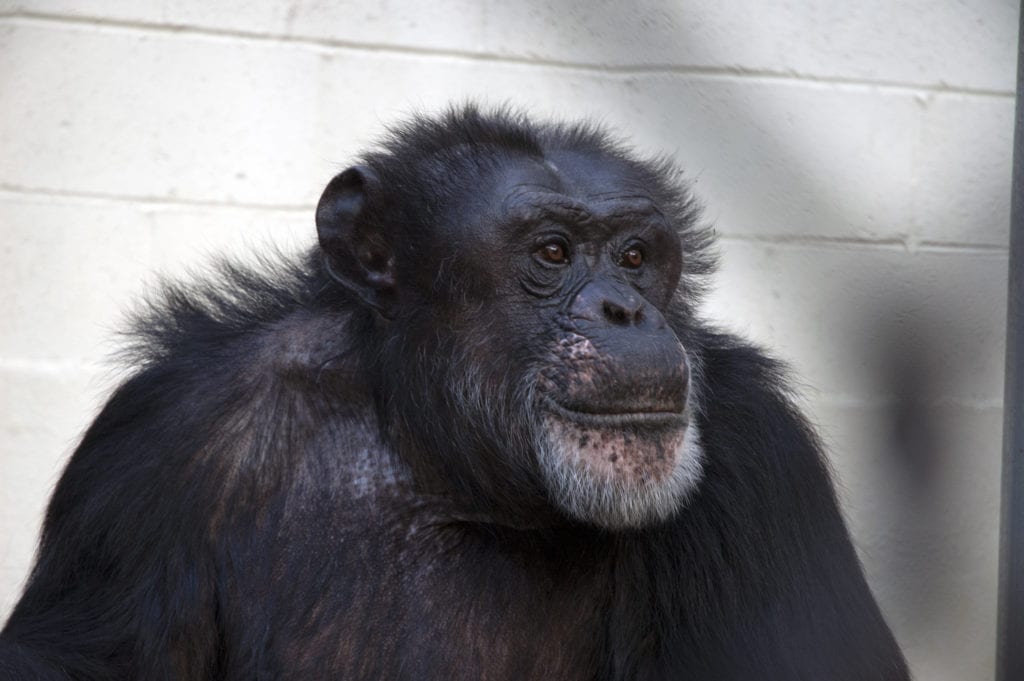 For a detailed historical background of Duane Rumbaugh and Lana, click here to read the GSU Research Magazine award-winning story, The Lana Legacy.

Until 2018, the LRC was the lifetime home to five chimpanzees (Lana, Sherman, Austin, Mercury, and Panzee), who each participated in countless non-invasive research activities before their deaths due to natural causes. These special individuals are dearly missed today by each of the researchers that were privileged enough to spend time with them and to consider them “colleagues”. These chimpanzees provided valuable insight and contributions to the field of comparative cognition, as can be seen below.

Lana (1970-2016) was part of the first LRC project in 1971, designed to produce an analog of human language in a nonhuman primate. It has been estimated that she has contributed data to more than 200 publications to date. She was a pioneer in language research, in studies of numerical cognition, and in research on many other cognitive topics.

Lana’s son Mercury (1986-2016), who died just a few weeks before his mother, was raised around language use but was not systematically taught (and did not spontaneously acquire) symbol meanings. He showed great proficiency in a wide range of computerized tasks.

Sherman (1973-2018) and Austin (1974-1996) were raised together in a language-rich environment. Principal Investigator Sue Savage-Rumbaugh and collaborators set-up problems that the chimpanzees could only solve through the use of language (e.g., Austin needed a tool to obtain food, Sherman had access to the tools but not the food, and the apes could use the keyboard to communicate with one another). In his later years, Sherman excelled in tests of self control, memory, and other cognitive competencies.

Panzee (1985-2014) was reared with a bonobo named Panbanisha by Dr. Savage-Rumbaugh, Dr. Karen Brakke, and collaborators. In many ways, Panzee may have been the most accomplished of all of the LRC chimpanzees, showing unprecedented levels of speech comprehension for the species, as well as impressive performance in memory and other domains.

Each of these chimpanzees died of natural causes after long, happy, productive lives. The field of comparative cognition will forever be changed by their contributions to science. They are each dearly missed by the human companions who loved these apes and who worked with them and cared for them every day. The Language Research Center and Georgia State University are greatly in their debt. It was a privilege to spend every day of their lives trying to promote these animals’ physical and psychological wellbeing, and partnering with them in the pursuit of science.

A memorial grove was planted at the LRC as a living memorial in honor of our departed primate friends, both human (Duane Rumbaugh, Judy Sizemore, Skip Haig, Michael Owren) and and nonhuman. The grove continues to be tended today in memory of those we miss dearly.

The above photo of Sherman outside in his play yard was provided by Charles Menzel, PhD.